Physical, mental, technical matters – for those who know me, you already know that there are one or two strange things about me. For a few months, I have been looking for calm, peace within myself. Unfortunately, without success. Even with meditation, I can’t get rid of my difficult nights, the fear of how others see me, my oversized EGO, my desire to be perfect and the feeling that I am not myself (that I’m lying to myself). About two weeks ago, I volunteered for an internship on self-rescue and rescuing rescuers in Charente Maritime. I don’t know why, but I knew at that time that it was THE internship for me. At that time, I had no idea yet of the changes that it would bring about in me. Here we are in the Charente Maritime department, with team 54 to meet Ben, Mathias, Roman and Fabien. After some explanation, the tone was set; these guys are not here for nothing. The idea is to pass on their knowledge, so others won’t go through the terrible things they did. That’s how I took it. Sébastien Couturier is a man, a mate, the friend of our new internship comrades. He, without knowing it, went so far with his mission, that he ruined his life, but he will certainly change the life of many others. Starting with those of his brothers-in-arms through their dedication to changing things for the better. And then those (lives) of the people training in team 17 and who, one day, will save a civilian or a rescuer. And finally mine!

A day and a half goes by, and, I think, we’re all shocked by so many little things that could change the course of an intervention, tricks that all firefighters in France should be able to do with ease.

But it’s not the case; we continue to insist on the technique to use for carrying a ladder, or how not to get our hoses into a mess in a corridor. Oh God! FINALLY, words; he’s not afraid of saying that a fire in Canada is capable of killing and that, whatever we say, it is the same fire that we have here. “It is possible to have an intervention within an intervention, guys!” This man is great not just in stature, but above because of the aura that he gives off. He and his group opened my eyes after all these years to pain from elsewhere. Problems that come from the United States, Canada, Portugal, Russia, Charente Maritime … I know about the pain of firefighters thank you very much. I am in shock! Without pressure, he manages to exhaust me, forcing me to reflect, to become aware of certain things. In just a few minutes, they offered me what I was unable to find. Yes, it was indeed during the last manoeuvre that I woke up. Just to let you know, it’s going to be hard going! Feeling very confident, I launched myself into this ultimate adventure with my mate, my friend, my saviour. Never during my years in the service , have I ever gone into an exercise lightly, so that’s not going to change now. With the team, we set off in the second fire engine, behind those with a professional baccalaureate. I have my doubts about the manoeuvre; the young people will go down, and won’t be able to come up again. This is our job. This afternoon, we must go to the bottom (N-2) and bring the young people to the surface. I get going with Michael and our new equipment, Rhinoevac [fire equipment] around our necks, light markers and an air assistance kit in our hands, and off we go. After the assistance, the alert message, kitting out the strong guys, the reinforcements arrive. And, the evacuation of the first victim is underway. There’s still a firefighter on the ground, and it is our turn to take him back up. Thanks to the green light beacon, placed on the ground by my team mate, we easily find the spiral staircase. The alarm to let me know the SCBA is running out annoys me; I quickly check my manometer, and that’s it. I’m done in. I start to go up the stairs. Michael asks me several times if I’ll manage; at the same time I hear words from a trainer or from the radio, I’m not sure which, saying, “you're not alone; there are more reinforcements”. I doesn’t matter; my f****** ego has won again. Why? Because, at the last step, I am in the shit. I still think that it is a trainer who is playing around by cutting off the air to my mask. So, I test the opening of my bottle, and use a breathing technique, but nothing. My mask starts sticking more and more to my face, and I start to suffocate. At that moment, I was no longer sure of anything. I looked for an outstretched hand, but there were just flames to my right instead; a wall to my left, and the guy with the professional baccalaureate lying on my legs. I’m in pain, because the stairs are crushing my bones, and for another thing, I know I’m not going to make it. I pull on my mask to shout to my buddy that I am in trouble, and that I really need him. The smoke is getting into my mask, and although I know that I’m in a firefighting training training facility, it’s not funny any more. I remove my on-demand valve to carry out one of the last self-rescue techniques. I hold the bottom of my hood [against my mouth] as a particle filter and I place my head on the ground. Time seems to be going very slowly, even though only a few seconds have passed, and Michael is fighting with his equipment. I can’t see anything; I do not know if I am on a call-out or a training manoeuvre. I think that I'm going to pass out. The flames are not going out. I assume they’ve got the situation under control from the outside and that my mates are behind me, but I’m not thinking straight, and I imagine that our colleagues in the fire in Neuilly are thinking the same thing. Your faces and the faces of my relatives leap at me, as if to wake me up, and it was exactly at that moment that I saw Michael’s gloves passing the air tube towards me. I connect to it, and appreciate the ocean air, because the cable comes from the air assistance units of SDIS 17 [on the coast]. Then I send an urgent request for help. I am dry; Nino explained to me afterwards, that by the sound of my voice, the team understood that I was no longer in the game. I am now connected directly to the kit with our victim. And yes, he is still there. All we have to do is get out of this mess. Just another two or three metres – an open window looks like the light at the end of the tunnel. Something like a Denver technique, but mainly movements like a snake running out of strength, and it’s OVER.

When I come down out of the training building, I start sobbing. I think about the awful things that just happened. I regret nothing, except putting my friend, the victim, and myself in danger. Jerôme, the new person at the technical support centre congratulated us: “wow, you guys were amazing, you went really far!” You cannot imagine what I just went through. The most intense moment of the past ten years of my life, since the birth of my children. I’d like to go back for a moment to the “I regret nothing,” – I am not crazy. I went really far pushing Micka with me. But I trusted him, and maybe my wife is right. “Nothing happens by chance. Take this adventure as an alarm for your next call-out”. Comparing means understanding. Fortunately, we had the very best equipment at our disposal from Rhinoevac and an air assistance kit to make our work easier. Thanks again to you. Now I will be constantly checking the status of my PPE, regularly keeping an eye on my manometer, and I’ll put aside my ego and more readily ask for help. I cannot tell you if it is the fear of fainting or the grim reaper that I encountered at the top of this staircase. But there is not a shadow of a doubt, for me. I grew and put aside the super firefighter that I thought I was. 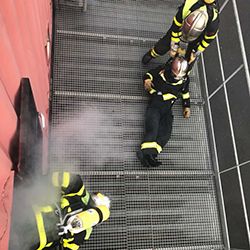 MSA's network of distributors can help find the right product for you.

Receive news and updates about our company, product range, safety solutions and services. Don't miss out!